Hasan is one of those students. He chose to write about Aylan.

Last fall, Aylan’s image (pictured bottom-left) awoke the world to the plight of Syrian refugees. He was the little three-year-old boy found drowned on a beach in Turkey. Hasan is from Turkey, and this news affected him deeply. In the following piece, Hasan uses metaphor and creative writing to explore not only Aylan’s story but also the larger story that refugees share:

Aylan was a Kurdish boy born in Syria in 2012. He was a lovely baby. When he was born, everyone in his village loved him because he had a beautiful face. He was the third child in his family. The stars started to shine more, the moon was brighter, and the sun became more orange. Birds started to sing more peacefully, and clouds were more white and fluffy. Trees, oh, the trees were greener. Animals were happy, and all nature was peaceful. All because Aylan was born and so innocent!

At the same time, there was a horrible man called Destiny! He longed to possess Aylan’s freedom. So, Destiny made a plan to steal Aylan’s freedom. He sent his messengers of Famine, Pestilence, War, and Death to Aylan’s village.

Aylan
This image of Aylan awoke the world to the plight of Syrian refugees and inspired Hasan’s writing. 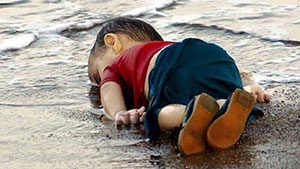 First, war attacked his village. Many people died, including Aylan’s sister. War destroyed buildings, but Aylan’s home still was in good condition. For now! Some people left the village, but Aylan’s father decided to stay, for it was their home.

Second, Famine attacked. Again, some people left the village to flee from Famine’s malice. But Aylan’s family stayed behind because they loved their village even if they had nothing to eat.

Third, pestilence attacked the village because there was no water, food, medicine, or anything. There were dead animals everywhere. At that point, Aylan’s father said, “That’s enough! We are leaving.” So they left the village!

They gave all their money to a man to transport them to the other side of the sea. The sea was called by his people the “White Sea” like peace’s white. The journey was going well until the last messenger called Death attacked when they were in the weak raft. The man called Death sent his other messengers, namely Waves. The Waves attacked Aylan from all quarters because Death was jealous of him and his brightness.

Aylan was a true angel from heaven because he was only three and had no sin! But the man called Death was a real enemy and doesn’t listen. So, ostensibly, the man called Death won! Nobody knows, except you, that Aylan actually won because his freedom came through death. Now he is free from all problems of the world, and he is in heaven now and Forever!

There are many stories like Aylan’s. All that happened before and will happen again.