Despite Everything, I Never Gave Up 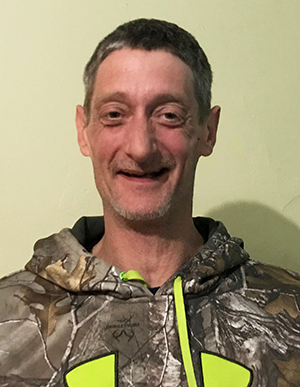 I knew Our Saviour’s was a decent place when I first stopped by. It wasn’t a big place. Kind of homey, down to earth. It was drizzling outside. I let them know who I was, and they said, “Come on in!” I was early, but they let me sit there for a little bit. I thought, “Yeah, they’re okay here.”

By the time I got to OSH, I’d been staying in shelters for almost two years. I was homeless for three years before that, living out of my truck and motels. Addiction has been the reason I’m homeless. It runs in my family. I think I first crossed the addiction line when I was 16. I’m 52 years old, and I’ve had a pattern of addiction my whole life. But I’ve never met a beast like meth before. It’s evil. We all go in thinking we can control it. Some people can control it better than others, but I’m not that type.

I’ve got four months’ sobriety under my belt now, which is the longest I’ve had in four years. It’s progress. I’m no hero. I’m just pretty resilient. I keep trying and trying and trying. I’m working on stuff so I don’t make the same bad decisions. I’ve been running from a lot for a long time, and I wasn’t taking responsibility for any of it. It’s time to buckle down. I’m just happy to be alive to be honest with you.

My family is a big motivator in my recovery. I’m the oldest of six. My brother has three-year-old twins and a baby girl. I don’t know them. I haven’t seen most of my family in three years. That hurts. My mom sat me down. She said, “You’re not coming around the family until you get a full-time job and your own apartment.” It was tough love, but she was right.

Well, starting January 1, I have a place with the help of Our Saviour’s. I’m going to Richfield. After being downtown, it’s almost like the country! I see a lot of grass, and the apartment complex is really spacey. It’s more than nice. That’s all I’m going to say. I’m not going to jinx it. Right now, I’m in a big room with 180 guys in bunk beds. I’m very blessed that Our Saviour’s picked me up. I’m looking forward to reading and watching television, maybe have a few guests over now and again. It’s the little things people take for granted.

I also got full-time work. Everything’s fallen into place. It’s a warehouse job and could open the door to more. My shift starts at 6 am in Fridley. I need to plan a bus route, which might be kind of hard that early. I have a bike. I might have to walk nine miles, but I’ll do what it takes to get there. I’m good like that.

If there’s one thing I want you to know, it’s that people can change for the better. Despite everything, I’ve never given up. To see me two months ago, I’m not the same person. I had lost that humanness. I’ve always had that spark of hope that someday I could get here. Our Saviour’s helped me to do it. Having a stable place to live, a home, makes a huge difference. I’m very grateful to everybody that’s contributed.