One Happy Reunion, Despite Immigration Ban

The recent executive orders on immigration have affected thousands across the world, largely resulting in fear and confusion. Samira, one of our students at the English Learning Center, was deeply impacted.

Just days after the orders were signed, Samira’s four-year-old daughter was on her way to be reunited with her mother and sisters here in Minneapolis when she was barred from boarding her plane in Uganda.

Samira arrived in the United States in 2013 with two daughters, Mumtaz and Mueahib, who are now seven-and-eight-years-old. Originally from war-torn Somalia, they spent years in a refugee camp in Uganda. After navigating a difficult and time-consuming vetting process, Samira, Mumtaz, and Mueahib were approved to resettle in Minnesota. While waiting to receive a departure date, which can also take years, Samira became pregnant and gave birth to her youngest daughter, Mushkaad.

Samira was devastated to learn their U.S. visas would not cover her newborn. She was advised to still continue on to the U.S. because it would be easier to bring Mushkaad here once Samira was a permanent resident. Restarting the entire application process could take an unknown number of years, but Samira was told that if she left Mushkaad behind, reunification would take less than a year. So Samira made the unimaginably difficult decision to leave her daughter with a family friend in order to ultimately build a better life for herself and all her children.

Unfortunately, hopes for a quick reunion remained unrealized. Less than one year turned into nearly four. Phone calls were Samira’s sole connection to Mushkaad. Worried and sad, Samira tried to adjust to life in Minnesota. She got a job at Walmart and took English and citizenship classes, knowing they would help her access more opportunities. In just three years at the ELC, she progressed three English levels and is currently one of our most advanced learners.

Samira_at_home_Jen_Ackerman_Washington_Post2
Samira and her daughters – Mushkaad, Mumtaz, and Mueahib – reunited at home at last. (Photo credit: Jenn Ackerman for the Washington Post) 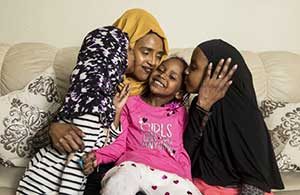 Finally, in December 2016, Samira received the long-anticipated news that Mushkaad’s visa was approved! She was scheduled to board a plane with a chaperon on February 2, to start her new life with her family. In Uganda, Mushkaad carefully prepared for the special day. She laid out the new dress her mother sent her, got henna on her arms, and had her hair braided. In Minneapolis, Samira and her two other daughters decorated a bedroom and bought new toys. All was eagerly prepared. But eagerness turned to dread within hours of the signing of the executive orders. The ban on refugees fell just three days before Mushkaad’s arrival.

Samira was fearful the order might include Mushkaad, even though she was only four-years-old and her arrival had already been approved. With the help of a friend, Samira reached out to Minnesota Senator Al Franken’s office. At the same time, Samira’s worst fears were confirmed. Mushkaad was barred from boarding the plane that would take her to her family.

Samira was one of the lucky few able to access a massive team of resources committed to helping her. Dozens of lawyers, Senators Al Franken and Amy Klobuchar, media outlets, and the public went to work. Samira’s knowledge of the U.S. government from her citizenship class and advanced English language skills helped her navigate these systems.

After what must have felt like an endless two days, Samira received a phone call in the middle of the night saying Mushkaad was on a plane and would be arriving that day! Through the tireless work of many, Mushkaad’s case was brought all the way to the Department of Homeleand Security John Kelly, who made a special exception.

On February 2, Samira tearfully embraced her daughter at last. She says, “I am very happy today to have my daughter Mushkaad home after painful years. I would like to thank everyone who helped me. I know a lot of people work[ed] very hard to get my daughter. Every refugee mom wants their child to be educated and have a better life than themselves.”

While we are thrilled that Samira, Mushkaad, Mumtaz, and Mueahib are reunited, we are also aware that there are thousands of families still separated. Samira’s statement was cited in an official complaint against the executive orders, and Mushkaad’s case is now being used in hopes of helping two other families in D.C. reunite.

For the moment, federal courts have suspended the travel ban on individuals from seven Muslim-majority countries. However, future policy regarding immigrants and refugees remains uncertain. We must continue advocating for resettlement to the U.S., while also providing welcome and support to our immigrant and refugee neighbors who are already here. If you need ideas of how to do this, please be in touch!