Getting Back to Dad

“[They] made me feel welcomed. It was nice just to have somewhere to go, where nobody judged you. It was the first time anyone had really spoken to me since I became homeless.”

Before anything else, Skyler is a dad. You can tell within 5 minutes of meeting him, hearing him talk about his 5-year-old son, Micah:

“He’s my ‘mini-me.’ He sleeps with one arm up, walks like me, literally looks just like me. He’s goofy. He’s funny. He likes Power Rangers, soccer, and martial arts and is starting kindergarten this fall. He’s smart. You can’t get anything past him.”

What might take you longer to learn is that Skyler also happened to be homeless.

Originally from Pennsylvania, Skyler moved to Minnesota two years ago when he finished his time with the Army Reserve. His son’s mother moved here, and he followed to stay active in Micah’s life. He had a good job working for General Mills, handling certifications and legal documents for exported goods. Homelessness felt like somebody else’s reality–something that would never happen to him.

Then, four months into his new job, disaster struck. Skyler was laid off. He couldn’t receive veteran’s benefits because he had never been deployed, and half of his unemployment went towards child support. He couldn’t access other resources meant to help people in need because he made too much money–even though he could no longer afford to pay rent.

When Skyler lost his apartment, he started living in his car. He says, “It was the longest month of my life.” He tried to park where there were other vehicles to avoid the cops, places like Cub Foods. But some nights, they did knock on his window. “Probably the 3rd or 4th time, one officer was talking with me for a bit. And then when he found out I was homeless, his mood changed. It was like, ‘You’re just homeless. Go be homeless somewhere else.’”

As he fought for stability, Skyler was still trying to see his son. He spent any money he had on hotels for the weekends he had Micah. He went to the workforce center each day, hoping to find something. Eventually, he sold his car, planning to sleep outside. “It was really hard…thinking about safety and having to watch all my stuff. It’s a constant worry–the unknown.” 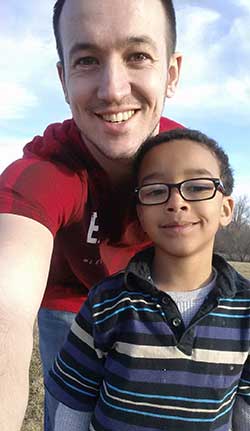 Fortunately, help wasn’t far away. Skyler was at the library when he saw the computer screen flash, “Our Saviour’s Housing people are here.” Intrigued, he went to learn more and met Derek, who connected him with Our Saviour’s Shelter. He says, “[They] made me feel welcomed. It was nice just to have somewhere to go, where nobody judged you. It was the first time anyone had really spoken to me since I became homeless.”

The same day he met Derek, Skyler also received a job offer! With a place to stay each night, he made it his goal to save money as quickly as possible. He walked to and from work–5 miles each way–to save on bus fare. In November, he broke down and bought a bus pass. It was his first time on a bus since middle school, and he worried it might cause him to be late to work.

About this time, his ex-wife found out about his situation, and Skyler lost his visitation rights with Micah. This was the hardest blow yet. “That was all I was able to think about. I wasn’t catching on as fast as I would at every other job. I explained to my boss everything that was going on, and he couldn’t believe how I was holding it all together. I was really lucky he was so understanding.”

Throughout all of this, Skyler’s parents were urging him to move back home to Erie. But there were no jobs there, and Micah was here in Minnesota. “My son’s everything to me. No matter what, I’m not going to leave him. No matter how hard it is for me, it’s worse without him. I’d call, and he’d hear my voice on the phone and ask why he couldn’t see me. Not being able to see him…it really took a toll on both of us.”

With the support of OSH staff, Skyler saved enough money to afford a place of his own. He contacted an old landlord, moved January 1st, and bought a new car that weekend. One month later, he earned 50/50 custody of Micah.

It’s now been over a year since Skyler slept that first night outside. He’s still in the same apartment and working the same job as a wholesale sales representative and loves both. “I’ll be there, probably till I retire. I have a degree in business management, so it fits. It’s a family owned business and really rewarding. I just got a promotion and a pay raise.”

Skyler thinks a lot about what life would have been like without OSH. “I’d probably–I know–I wouldn’t have my son. I’d probably be back in the military or back home struggling, looking for a good paying job. I just want to say…I was at my lowest point. I really didn’t know where I was going to get food or lay down. The amount of time [OSH] put in, it’s beyond…I can’t describe it. What they do, it’s amazing. I’m thankful for it. If they just keep doing it and helping others, that makes it better.”